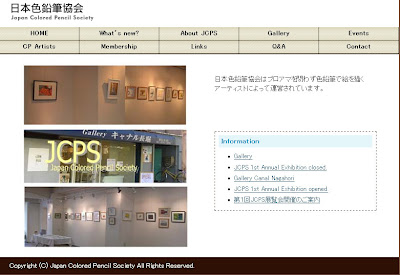 Late last year, UKCPS received news from Takako Ikuta in Japan. Some of you may recall Bob Ebdon writing about her in his sign-off post back in September 2008.

....finally - back to our very first exhibition. This took place at Patchings Farm in 2001, and our very first AGM was held there on a Saturday. The following day I got a call from Patchings - a lady had turned up for the AGM, she had come a long way, and would I like to meet her. It turned out she had come a VERY long way - it was Takako Ikuta, from Japan. I was delighted to meet her, brought her home for tea, and have kept in touch ever since. I was very excited to get an e-mail from her just this week to announce that she has formed the Japan Colored Pencil Society. Now look what we done!

It's very interesting to note that some of the artwork is using coloured pencil at the same time as adopting the subject matter and compositional style of traditional Japanese artwork of the eighteenth and nineteenth centuries.

Takako Ikuta UKCPS CPSA is a coloured pencil artist and author who has exhibited with both UKCPS and CPSA, was awarded signature status with both societies in 2004 and 2005 respectively and has won prizes and commendations at the annual exhibitions of both societies.

Which I think I'm right in saying makes her unique in the world!
Posted by UKCPS Blogmaster at 08:00

Thank you very much for your kind introduction.
JCPS is still a small society, but I am very glad that we JCPS can link to the many artists like this.
I informed the JCPS members of this post at [http://j-cps.org/information/]
Almost of our mebers don't understand English and my English is also poor. I don't know how to express my feelings, but I want to express my deep appreciation to you, Bob and the UKCPS on behalf of JCPS. You always encourage us!
Happy New Year to you all!!

Do let us know about your next exhibition when you have more details.

UKCPS- Blogmaster
For members of the UK Coloured Pencil Society. Contact via: blogmaster@ukcps.co.uk

No. of subscribers to this blog